+ Letters written by Per Yngve Ohlin + 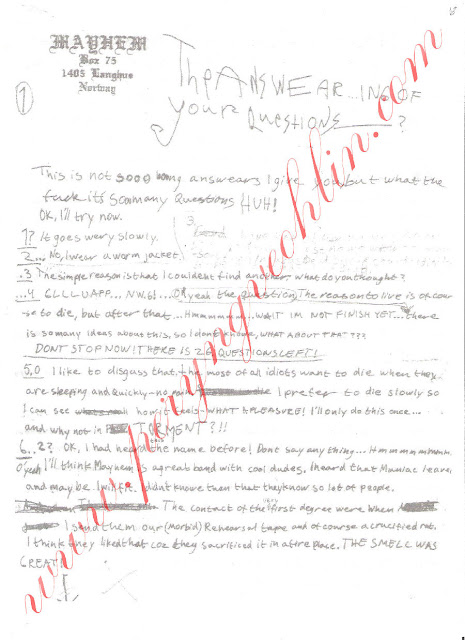 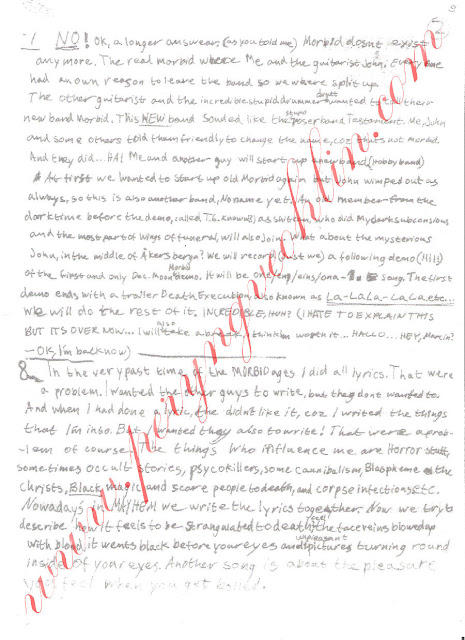 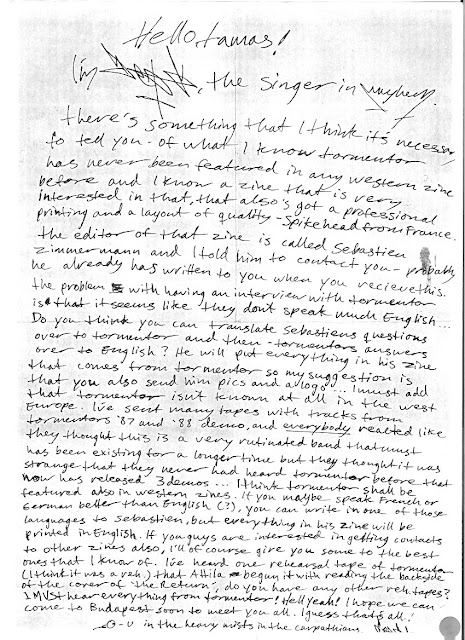 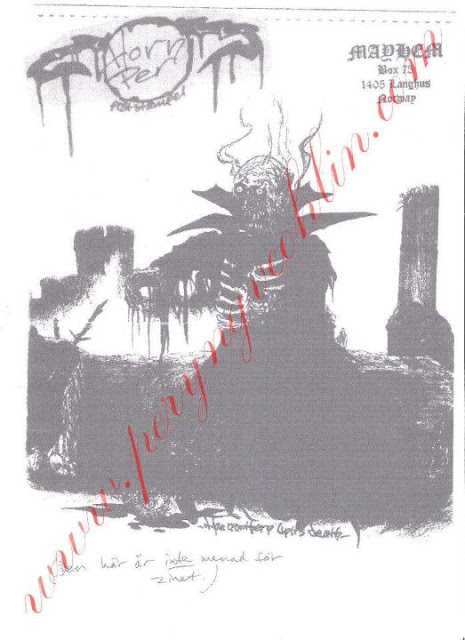 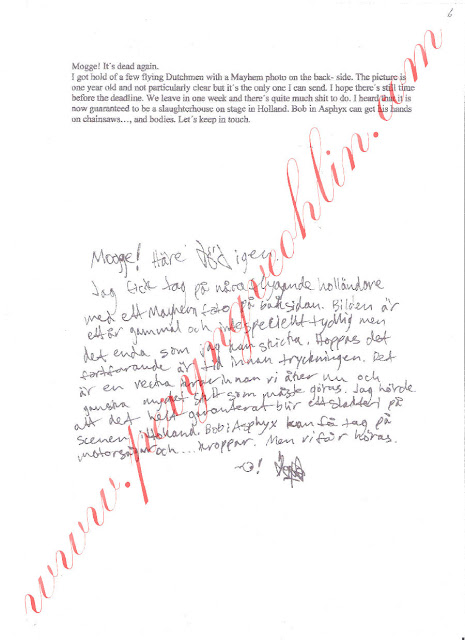 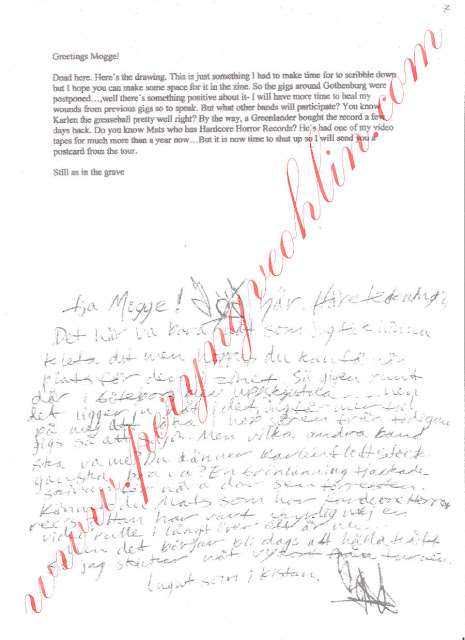 dead musical taste was a great inspration to me since 2008, even i listen to first wave black metal and old school death metal since 2002, but was in 2008 when i started do read his interviews and saw the great musical taste he had, bands like necrovore, parabellum, sadistik exekution, this is the best evil black metal from the 80's.

i dont know why he hated entombed, because left hand path is a evil dark death metal album, and brutal too.

i feel the same about dead, when he said that he didnt belong to this world. i think i'm not fit in this world too. but i will not to kill myspace, only if i finish in misery, suffering pain of hungry i will myself. i feel that i dont belong to the earth, because i studied about nazi occultism, gnosticism etc and saw that the world it is a war between 2 forces, the sionism(demiurge racee) against the aryans(anti cosmic race), so one side see me like goyim and want to eliminate me, other side want to eliminate me because i have schizophrenia an d nazis dont accept any weak human living in the world, because they want to create a super human race to start the war against demiurge.

so, i really dont fit in this world. i hate all humans, because i see that everbody is against me in this world. i hate all people i know, expect people from my family. i see all ex ''friends'' like enemies. i'm complete isolated guy. and death metal, black metal, is my force to continue my life in hatred. instead of killing myself, i will live dont giving a shit about what happens in earth, i dont give a shit about politics, society, all this are crap. i live only for death/black metal underground, like dead lived. dead was a true death/black metaller, but his depression destroyed him. i'm from south america, sorry my crappy english.

Wow!! that's great!! we have an old listener of Black since the first 2000s :) and an interviewer :) nice to meet you man and welcome on the blog!!! He mostly hated Entombed because he never tolerated Drutt's behaviour. During gigs so to speak. i understand you man. Humans are terrible most of the time and it's not easy for me neither but i'm here and i fight everyday to remain in this world because i want so many answers from life, i think it's important. so, are you a nazi? i'm not so much into politic like Morbid did. It's sickening the fact that just because a person is different can't be accepted by this society. Don't feel inferior if you are not perfect like Nazis want to. Be proud the person you are. Always. You are not the only one who hate this world. Trust me. So many people don't fit here but we have to fight :) It's not a crappy english :) i understand it!!
-Dark Hel

no i'm not nazi, but since 2012 i studied about hiperborean gnosis, a very old belief used by third reich, so i discovered many things about this wolrld, the fake of christianity, the way that the jews see the goyim etc but i saw that i dont fit in this world, because i'm not jew and i'm not perfect person to me accepted in nazi society.

but, politics and society are shit. i will talk about dead. i'm a guitarrists and i play some other instruments too, like keyboard, drums, bass, but my main instrument is guitar. i grew up a lot as a guitarrists, when i discovered dead musical taste. and i saw that, one of the dead's influences was early sepultura, early sepultura was a great impact on me since 2002, the morbid visions album is total darkness.

even fenriz(darkthrone) beeing so diferent than dead, reading fenriz interviews, a saw that the musical taste of fenriz for black metal was like dead musical taste, the first wave black metal bands, like sarcofago, parabellum, necrovore, merciless, possessed etc and read fenriz and dead interviews, was a big influence to me as a guitarrist.

i think dead only lived with euronymous because he was too young. because euronymous always said to him ''you should kill yourself'' somethings like that. i think euronymous had some sociopathic behaviour. i lived many years having ''friendship'' with a sociopath too, but i grew up, learned about misanthropy, and nowadays i'm in a war against this guy, he starded it, i have some knives with me to defend myself. i think dead was a brave man, if he has been in my place, he would kill his enemy so fast. dead was a really brutal person, he had nothing to loose in his life.

Ah good that you are not a Nazi. Yeah i understand that you can't tolerate many things in this society but like i always say in the Per Yngve Ohlin Tribute Page on Facebook, Pelle wasn't so negative as a person, he was a guy full of dark humour also!! he liked to have a laugh one or two. About musical taste, heavier the better about Dead. He really appreciated all the bands you mentioned. knives with you? why? Have you fear he can kill you? oh god that is terrible!! i'm sure that Pelle understood his mistakes in his life and he discovered so many things now about the past. i'm sure about this.

yes, my enemy sent many death threats to me since 2012, and in 2012 he throwed a rock on me when i was very weak and drunk in street, mixed the fact i was drunk with medication that i'm forced to take. i stop drinking this year. he lives in a building next to the builind i live. i started to walk with knives since 2006, because in time of school people used to beat me, so when i knew about inner circle, dead, euronymous, varg etc i starded to used knives to defend myself, because i didnt know after knowing about old mayhem etc that there was so brutal people in this world. it's was a inspiration to me. so, i'm in a total war against this guy

Please never misk alcohol with medications because can be really bad!! a person i know has your same problem and it's really hard. Damn, bullying sucks. I always been bullied because i was different. I suffered by strong panic attacks and depression but people of my age never understood why i behaved in a certain way and high school period sucked a lot. Good that you stop drinking!! it's really good and don't hesitate to ask help if you need it. It's important.

+ Per Yngve Ohlin Site +
I'm a Pelle's worshipper but in a right way :)